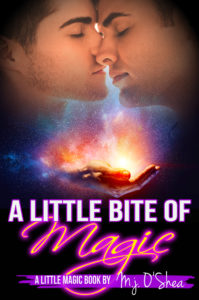 A LITTLE BITE OF MAGIC

In a family full of powerful witches, Frankie Vallerand is the black sheep. He doesn’t care about honing his magic. All he wants is to open up a restaurant and spend his days serving up delicious food. But when he sees a customer crying and wishes for her to be happy, he inadvertently transforms his old wooden soup spoon into a wand, and realizes that maybe a little bit of kitchen magic is just what his customers need.

Addison Allbright is The Phantom Foodie, an anonymous food critic notorious for his scathing reviews. For most people, being paid to eat would be a dream job. Not for Addison. He doesn’t care for overpriced designer food. He’s a tea and toast kind of guy. Until both the food and the owner of L’Osteria Di Pomodoro sweep him off his feet and throw his neat, orderly life completely off-kilter.

Frankie isn’t sure how to tell Addison he’s a witch, or that he charmed Addison’s food the night they first met, without sounding totally crazy. But little does he know that Addison has secrets too. Not only did he snark Frankie’s restaurant in his last review column, he’s also engaged to be married…to a woman.

A LITTLE TASTE OF MAGIC

Arlo Vallerand is part witch, part fairy, and a whole lot of never been good at settling down. He blows from town to town, hangs out for a while, and then takes off when he gets tired of wherever he’s been. It’s how he is – well that and he’s really good at unintentionally putting spells on things. It’s a family curse. It can get a bit awkward from time to time

Gray Baxter likes for the parts of his life to stay just how he arranged them thank you very much– people, his town, his family. Change gives him hives. He wouldn’t know what it was like to lose control completely since it’s never actually happened. At least it hasn’t until now.

When Arlo comes to town he does exactly what he does best – charm everyone and everything in his path. He’s never loved anywhere as much as he loves Baxter Hollow and the prickly son of the town’s wealthiest family. Gray can’t keep his eyes off of the beautiful newcomer. . . and he can’t decide if he wants to strangle him or keep him forever.